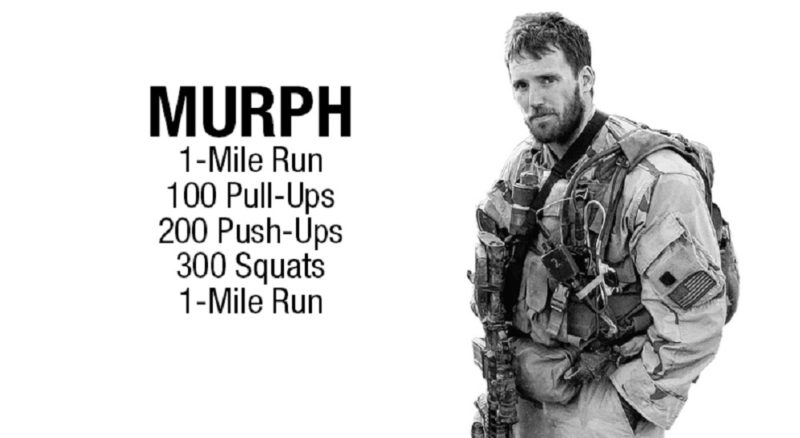 The Murph is a Crossfit workout which consists of the following:

Because it only contains bodyweight exercises, the workout appeals to calisthenics enthusiasts and athletes in other disciplines.

The workout is one of the most famous CrossFit Hero workouts in honour of Navy Lieutenant Michael Murphy.

An actual Murph workout should be completed using a weighted vest. The vest should weigh 20lbs, which is just over 9kg.

How long does it take to do the Murph?

According to wodworldrecords.com, the fastest time taken to complete a Murph is 34:38 by a male (Josh Bridges) and 36:42 by a female (Kari Pearce). Both times were recorded when the workout was used at the 2016 CrossFit games.

Does the Murph have to be done in order? How is best to partition it?

The runs have to be done in order (1 mile to start and 1 mile to finish), but there is no strict order to the reps, which means you can break them down in whatever way works best for you.

The most common method of partitioning the reps is based on the Cindy CrossFit workout which breaks the reps down as follows:

If you are particularly strong at squats, then you may benefit from trying to get them out the way earlier. If this is the case, then you may prefer the following variation:

I’ve talked so far about what is involved in the Murph and expected times to complete the Murph, but I’ve not yet addressed the Elephant in the room…

As someone who is more of a calisthenics purist and values form over speed, I think the CrossFit’ kipping’ pull-up technique used makes a big difference to the workout.

I love the passion behind CrossFit and the variety of different workouts in the sport (especially the bodyweight ones), but I’ll never sacrifice form for speed during my own workouts. I simply couldn’t live myself if I started performing kipping pull-ups 😉

So how does this differ? And to the beginner readers out there, what does this even mean?!

Kipping pull-ups refer to a pull-up technique which is common in CrossFit and uses a swinging motion to complete each rep (see the video below).

Correct form pull-ups, on the other hand, should be performed in a controlled manner, with the torso and legs remaining as still as possible throughout each rep, and the scapula disengaged fully at the bottom of each rep. More about this technique can be seen in our technique article “How to Achieve Your First Pull-Up: A Beginners Guide“.

I would fully expect the total time to be increased when performing correct form pull-ups, but just how much this increases by would be hard to say.

My recommendation would be that unless you’re training for or competing in a CrossFit competition, you should train using correct form pull-ups when completing the Murph.