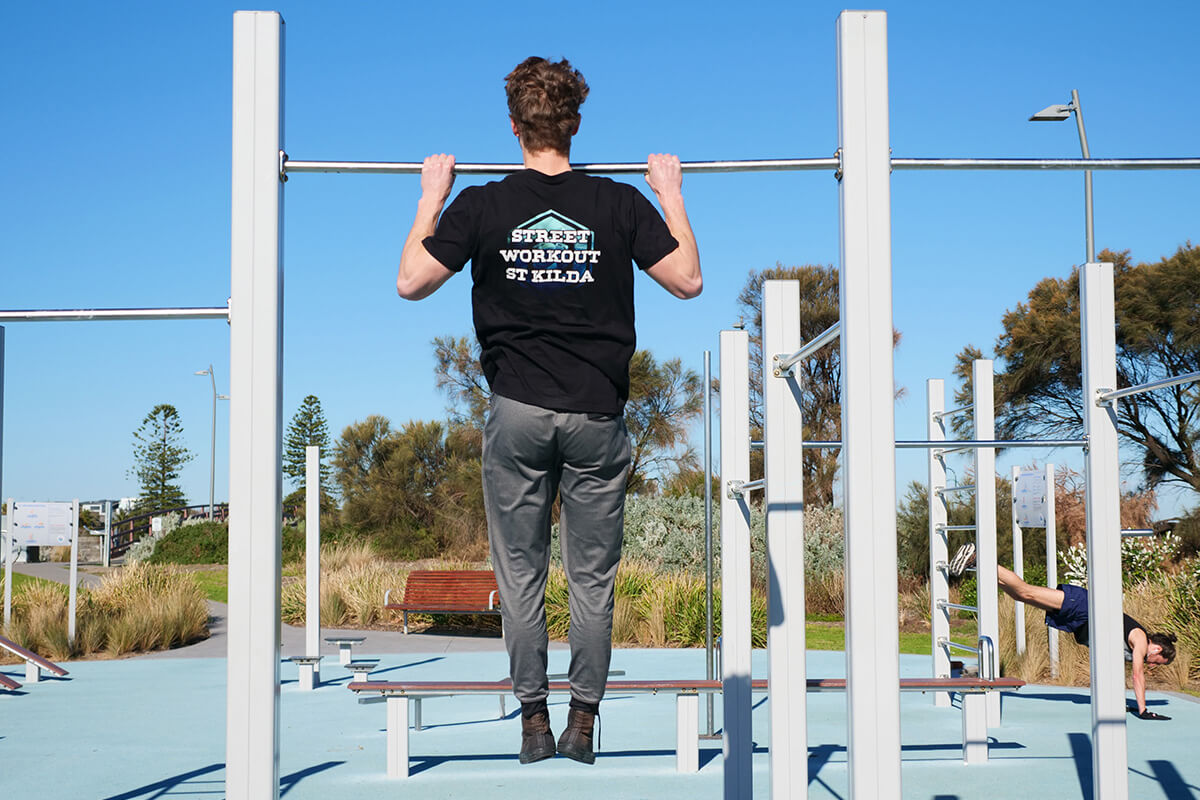 Calisthenics Street Workout was established in Eastern Europe as a means of staying fit with minimal equipment. It incorporated basic bodyweight movement patterns, gymnastics, and new elements never before seen in the fitness community.

Calisthenics is a relatively new sport but has built a ton of momentum over a very short timeframe. The case for calisthenics is that it is not just another way to train. For many practitioners, it’s a way of life. Unlike many other ways of training, calisthenics has higher goals.

In calisthenics you don’t do push-ups to improve the number of push-ups you do, you don’t do pull-ups necessarily to improve how many pull-ups you can do. These are by-products, but not the end goal. Likewise, you don’t train for obtaining an aesthetic physique. It’s all part of the journey.

Beyond all this, the goal of calisthenics is to master the movement. Yes, of course, there is a need for a basic level of strength that can only be achieved by smashing out repetitions. However, once you establish some basic strength, you will find new horizons.

Calisthenics branches out into two distinct paths: statics and dynamics. Statics is the path of strength. It is primarily concerned with isometric holds. Isometric holds are positions that are held against gravity. In isometric holds, the muscles keep tension while staying the same length. The most basic example is the plank. High-level isometric holds include the human flag, planche and front lever.

Isometric holds are considerably more difficult than most isotonic contractions where muscles change length. There are several reasons for this:

Dynamics or bar flow is about power, momentum and self-expression. Dynamics are also called calisthenics freestyle and is the format for calisthenics competitions all around the world. As the name implies, there are virtually no limits. Every athlete has their own style and unique moves.

At the heart of calisthenics freestyle, is how to move efficiently. This primarily comes down to controlling momentum and understanding the mechanics of the body and the bar. Once this fundamental understanding is established, it becomes a creative process. Much like a painter explores new brush techniques, calisthenics athletes explore new ways to move in relation to the bar.

There are many aspects to freestyle. It’s not just about being the flashiest athlete. Flow, technique and uniqueness are also factors that are considered both casually and at the competition level. Although athletes have wildly different styles and tricks, calisthenics freestyle, like statics, has a ton of well-known ubiquitous moves that almost all athletes use.

As the sport gets more well-known and athletes continue to out-do themselves, calisthenics freestyle finds itself at the crossroads of innovation and human limitation.

How do I start calisthenics?

Calisthenics is not easy. However, as long as a logical path is taken, it does not need to be needlessly complicated. Determination and a certain amount of grit are required to become proficient in calisthenics. The first step should always be to build a strong foundation.

Many people that start calisthenics have little to no experience in bodyweight strength training. This goes for most people, even those that train weights in the gym. The reality is training weights does not prepare you for calisthenics. The two training methods are entirely different, and although you may pick up some movement patterns quicker, it’s important not to skip steps in the beginning.

A few things to keep in mind in calisthenics is the emphasis on certain parts of the body. Calisthenics is very upper body orientated. It’s essential to start building strength in the arms, shoulders and core. Not only is it vital to build strength, but arguably power is most important in calisthenics.

The difference between strength and power is that power is explosive and allows us to expend a large amount of energy in bursts – whereas strength is all about control. Hey, but I thought statics were all about control? Yes, but consider how long you need to hold a static hold. Perhaps 5 seconds? The reality is, for most things in calisthenics, you will need power – you will need to be able to exert large amounts of energy in short bursts.

What is a good strength foundation for calisthenics?

A good strength foundation should include all the fundamental movement patterns. These include horizontal push, vertical push, horizontal pull, vertical pull. In addition to this, you should have a good core – which should be trained using isometric exercises.

Here are some good benchmarks to aim for before progressing to calisthenics statics and dynamics. All reps are given per set. Ideally, you should be doing 2/3 sets of each per workout.

The above should be considered a bare minimum; however this may be very hard for many people! It is essential to be build strength in steps and not to be discouraged by the required volume. Build up week by week. Do push-ups on the knees or pull-ups using resistance bands in the beginning if you have to, but you should be in good shape if you keep the progress coming week in week out.

For someone who has never done strength training, achieving these numbers can take up to 6 months. For someone who has a background in weights, potentially you can already accomplish these rep ranges. In that case, it might be time to start working on other aspects of calisthenics!