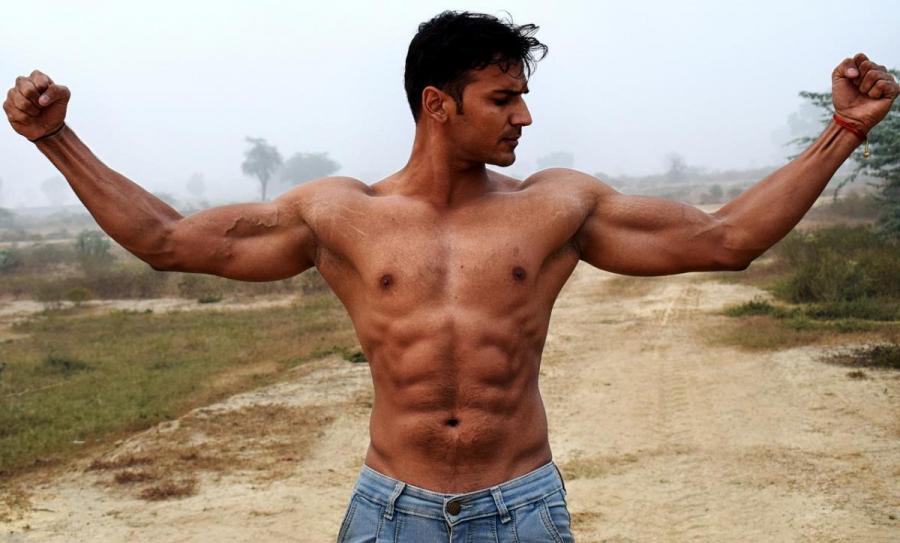 If you’re wanting larger arms, then Calisthenics can deliver the goods.

The exercise list is full of familiar moves like pull-ups, curls, chin-ups, and other favourites. Some have variations to offer greater bicep development over other muscle groups.

Each exercise is listed in detail below, but a summary of exercises covered in this article is as follows:

Of course, you must learn how to perform each exercise properly. This means with an excellent form to let your biceps benefit from the exercise and to avoid injury too. To help with this, we’ve included some YouTube videos to demonstrate the exercises, so you can see exactly how it’s done.

#1 Bar curls on the parallel bars

Why This Exercise – A set of parallel bars are a common piece of equipment with bodyweight exercises/Calisthenics. But they can be utilised differently than normal with bar curls. With palms facing you, it activates the biceps more than usual and takes some of the efforts away from other parts of the body.

The Method – Laying on a bench is often best here. Or lie parallel to the floor by walking your legs out to the right position. Ensure that you’re comfortably able to reach up and grab one of the parallel bars. Use the palms-out grip for better bicep activation. Pull yourself up to the highest point. This should let your head reach over the bar, almost like a chin up. Aim to get a proper curling motion and fully extend back down again to lock your elbows out.

Why This Exercise – The Australian Pull-ups (otherwise called the Bodyweight Row) adjusts the angle you’ll perform the pull-ups. This makes your biceps take more of the strain and additional effort is required to complete each rep. They’ll soon be burning when you try this exercise, so you know it’s doing your arms some good.

The Method– The Aussie Pull-ups can be performed on a pull-up bar or a set of gymnastic rings if you have them available (the latter is perhaps best here). Your body should be laid out with your legs under you and outstretched, while you’re directly under the rings or bar to reach up and grab them. Either have someone help you to position or position something under your back to elevate you initially. Then pull yourself up. To get the most benefit, run through the full motion to push your biceps fully.

Difficulty Level  – Easy / Moderate. Train this exercise in the same way you’d train pull-ups. Move on to pull-ups or chin-ups if you find this exercise too easy.

Why This Exercise – The Head bangers is a useful variation to the traditional chin up. It includes both pushing and pulling motion for something a little different. It gives your biceps, forearms, deltoids, and lats a workout.

The Method – Using a chin up bar, raise yourself to a comfortable position where your head is just below the bar and a distance out from it. Then push in to close the distance to the bar until you’re almost touching it. And then out again to create distance between your head and shoulders, and the bar. This motion is done repeatedly and at a rapid pace to maintain the effort. Also, to increase the difficulty, raise your legs together to your head height as you hang on the bar and then complete this repeated movement.

Difficulty Level  – Moderate. This exercise can be harder than it looks because of how your biceps have to hold your weight as still as possible. A set of 10-12 reps is good going here.

Why This Exercise – Not unlike other exercises like the overhand pull-up, the Chin-up develops the body into the desired V-shape that’s so recognisable. The movement will build the biceps, back, and shoulders especially. Performing Chin-ups underhanded is a switch-up that benefits the biceps more though.

The Method – Use the underhanded grip to get a purchase on the bar. Now as you hang down, get used to the feeling. Then position your shoulder back from the bar to get better form. Now begin to pull yourself up and get your head over the bar to complete the chin up. Ensure your arms get the full movement to obtain the most benefit. Build momentum to make it easier to complete the required number of chin-ups.

Difficulty Level  – Moderate. Concentrate on proper form, ideally working sets between 6 – 10 reps. If you’re outside of that range, try using resistance bands to make it easier, or a weighted vest to make it harder.

Why This Exercise – The inverted row chin up puts a spin on other similar exercises. With this one, it puts the most strain on the biceps to lift your upper body and part of your lower body too. While your feet and legs still partly support your lower body, the biceps do most of the work here.

The Method – Place your feet a comfortable distance apart. Picture a crab-like shape with feet planted and legs only at a slight angle, but the upper thighs, torso, head, and arms elevated. When the arms are fully extended, your head will be lower than your legs. Then the inverted row chin-up is where you pull yourself up to where the bar touches your chest. It’s only necessary to hold that for a couple of seconds before moving back down again.

Why This Exercise – The one-arm bar curls allows your bicep to do the work for you. The forearm and shoulders also expend some effort too.

The Method – Start with the bar held in the centre with one hand. Then lift the bar slowly by curling your arm similar to barbell curls. Complete the full movement to the point where the bar is at or just above your chin level. Pause for a split second, then slowly uncurl the bar back to the original position with your elbows locked out. Avoid using body momentum to encourage the bar higher because it only adds to the difficulty and unsteadies the bar when held by just one hand.

Difficulty Level  – Moderate/Hard. Aim for low rep numbers to build strength, and if you find these too hard then go back to using both arms.

Why This Exercise – The Ice cream makers is an alternative exercise that kicks your biceps into high gear. You’ll need a strong grip and good concentration to complete this one too.

The Method – Jump up to the bar. Pull yourself up to a level that’s similar to a chin-up level. Steady yourself. Now remaining at the same height, lift your legs in parallel and swing your body through similar to the first half of the motion of a playground swing. Eventually, your body will be fully extended flat in the air. The body must remain rigid when performing this exercise because there’s already considerable motion from the swinging over 90-degrees. Therefore, the biceps continue to be engaged all through each rep.

Difficulty Level  – Tricky at first! It’s all about the rhythm with this exercise, so don’t get frustrated if ice cream makers feel impossible when you first try them.

Why This Exercise – The one-arm negative pull-up proceeds with the one-arm chin up. The most important aspect of this bodyweight exercise is that it should be slow with positive control through the movement. It’s the opposite of a rapid-fire technique here.

The Method – Jump up to the overhead bar with both hands. Steady yourself. Perform a pull up to get your chin and neck above the bar’s level. Then release one hand from the bar. Now begin gently lowering yourself using one-arm until the arm is fully extended. The lowering stage should take 8-10 seconds in all. Don’t rush it.

Difficulty Level  – Hard. This exercise is a good first progression to the one-arm chin-up. Train low reps to build strength, and focus on slowing down the lowering phase of the exercise.

Why This Exercise – The forearm and bicep get the most benefit with this isolated exercise. It’s an advanced bodyweight exercise for people with powerful arms.

The Method – Grip the bar with one hand. Leave the other arm pointed out in front of you. As you lift yourself, the opposite shoulder with post back and outwards. Then when reaching the stage where your head is above the bar, post your other arm out in front of you (almost like a pointing gesture).

Why This Exercise – Muscle-ups have an enviable reputation as tough. Real tough! Can you already perform muscle-ups easily? Then try the underhand muscle-up!

The Method – A muscle-up has several parts to it. It includes a pull up on an overhead bar (or a chin-up in this case), a swing outwards and back from the bar, knees raised and kicking out with the legs to give you that little bit of extra upwards movement. Trying to get straight up will likely fail to get your waistline above the bar. It’s necessary to use a swinging outwards to inwards motion with your legs to get the momentum to complete the muscle-up. Watch the video to see how this is done. Practising the different components of the full movement – such as knee raises and chin-ups – is often best before attempting this exercise.

Difficulty Level  – Legendary! The exercise in the video is been demonstrated by Marcus Bondi… What else did you expect?!

Can I build big biceps using only bodyweight exercises?

Bodyweight exercises mainly build strength and dexterity, rather than pure muscle gains. While it’s not uncommon to see muscle gains including enlarged biceps, for major improvements in size, weight training is a good idea too.

With bodyweight exercises, the biceps can improve in size and strength when using the ten exercises detailed above. They isolate the muscle groups sufficiently to give the arm muscles more attention. For anyone who doesn’t enjoy weight training, then bicep-focused bodyweight exercises will deliver gradual strength improvements and other benefits without getting bored in the gym.