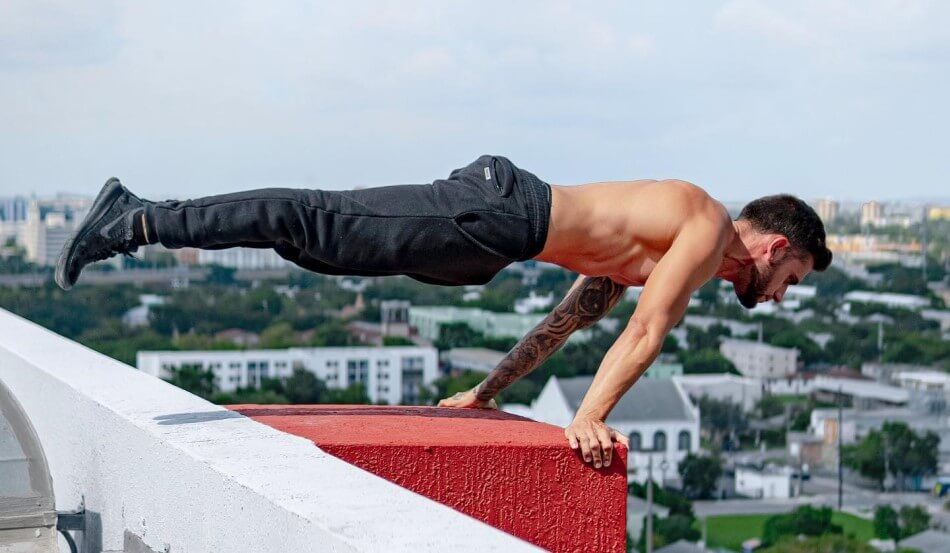 The planche is one of the most iconic calisthenics movements to date, and there is perhaps no other movement that receives as much attention as the planche.

There is a good reason why this is the case – the planche is an exceptional exercise with a ton of exciting variants, and the skill ceiling for this movement is sky-high.

This is exactly what makes keeping up with and following talented calisthenics athletes so exciting. Not only do we get to see a ton of mind-boggling feats of strength being performed, but we also have someone to look up to and aspire to be.

With the right work ethic and drive, anyone can master the planche, and the three people we are going to talk about in this list are prime examples that this is the case.

Let’s get straight into it.

Out of the three athletes on our list, Osvaldo Lugones is most likely the one you are going to already be somewhat familiar with.

Being somewhat of an OG with the Thenx team, Osvaldo Lugones has been a high-end calisthenics practitioner for years now, and the number of feats of strength he has performed over the years is almost incalculable.

The planche is just one of the many moves he has mastered. On his Instagram and various Thenx YouTube videos, Osvaldo is commonly seen performing some incredibly advanced variations of the planche. Pick any variation of planche and Osvaldo will have done it. He is just that talented.

Moreover, whilst the planche may be considered one of his primary areas of expertise, this doesn’t mean that he isn’t competent in other faucets of calisthenics too.

In fact, there are some people out there that cite Osvaldo as being the strongest overall member of the Thenx team, and whilst this is still up for debate, there is no doubt that he is one of the best.

In addition to all the information listed above, Osvaldo also has a ton of guides focused around the planche on YouTube. So, if you are looking to learn from one of the greats, then Osvaldo Lugones might be someone worth paying attention to.

Artem Morozov is yet another well-known figure in the world of calisthenics, and he is even known for being one of the few people in the world that are able to do a planche by just using his fingers (more on this later).

In addition to his out of this world strength, Artem also runs a successful calisthenics school and has trained students all the way from beginners to professionals.

The planche is one area where Artem truly shines, and despite his exceptional skill overall, this is what he is primarily known for.

In specific, his ability to perform a planche using just his fingers is what truly put him on the map – this move is incredibly hard to do, and even people that train for their entire lives are usually not able to do this.

This move is usually what brings the most people to him, and the fact that it is such a spectacle to see gives him a huge advantage over other schools/athletes.

However, even though the aforementioned reason may be why people are so interested in him at first, this usually serves as a gateway to show how incredible of a person he is overall.

There is no doubt that Artem is one of the most talented calisthenic athletes in this world, and the things he is able to do with just his body are truly unbelievable.

Although, do not let his position on this list fool you; Simonster is unfathomably talented, and he can perform incredible feats of strength with ease.

This athlete has turned himself into somewhat of a brand because of his skill, and he has numerous programs, workout routines, and eBooks for those that would like to get to a similar level.

Editors note: You can see what we had to say about Simonster’s program on our list of best calisthenics programs here.

This makes Simon a great option for those of you who are looking to learn, and he even offers individual programs for specific moves like front levers, handstand push-ups, and of course, the planche.

Moreover, unlike many of the other options you may have when it comes to learning calisthenics skills, it would be fair to say that Simon lends himself to the more professional side of things, with all of his lessons and guides being incredibly high-quality.

That goes without mentioning his insane physique – yet another reason why he is so notorious within the industry.

The planche is certainly one of his specialities, and it is not uncommon to see photos of him performing planches in the most difficult of places. In fact, it seems as though planches are second nature for Simon – it wouldn’t be a surprise to hear that he does them while he sleeps.

All of the athletes we talked about on this list are incredibly talented, and there is no doubt that they have inspired millions of people around the world to pursue their own calisthenics journeys.

There are a ton of other skilled calisthenic practitioners that could have easily made it onto this list, and in reality, there is a near-endless list of people that deserve a spot.

Alas, the ever-reaching constraints of time and resources do not allow us to list every talented person in the world, and the three we mentioned today are the ones that stuck out to us the most.

If you have dreams of mastering the planche, with the right amount of dedication, this is more than possible, and you too could one day be featured on a list akin to this in the future.