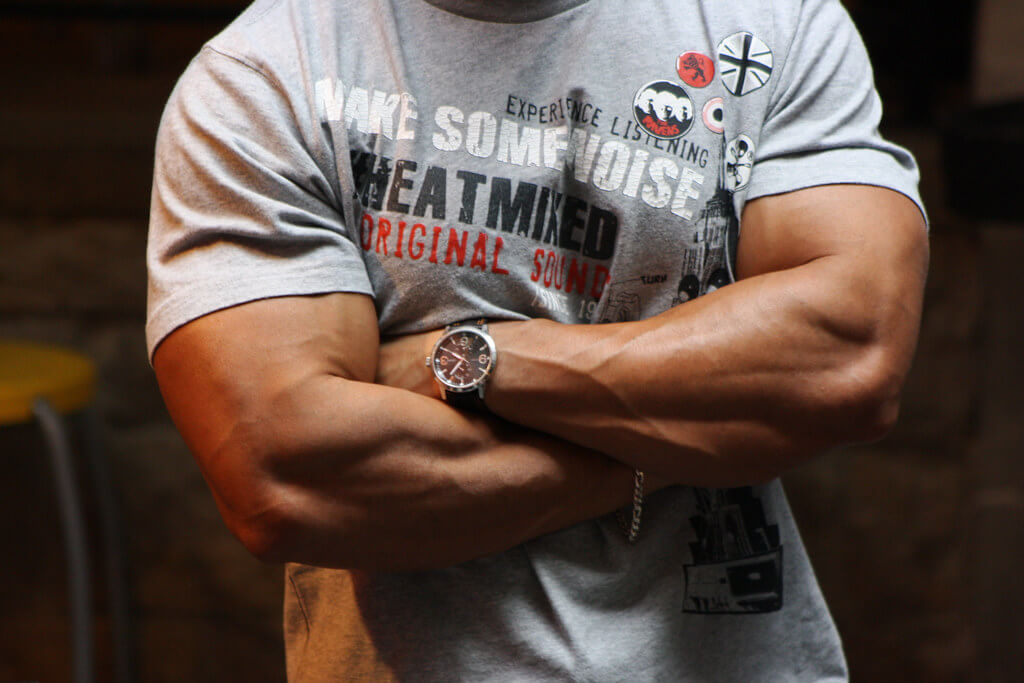 The forearms are often the last muscle that men think about when they start training.

Once you’ve been building yourself bigger biceps and triceps, you suddenly realise that without large imposing forearms your arms look kind of strange.

Then all of a sudden, you’re panicking and searching the internet for guides on how to build bigger forearm muscles (Hi!).

Well, let’s not beat around the bush. In this article, we are going to be looking at how to build bigger forearms using bodyweight exercises.

We will also take a quick look at how to do so using weights, just because you asked so nicely (well we assume that you did).

By the end of the article, you should know how to build bigger forearms without weights, with weights, or using a combination of the two.

Anatomy of the Forearm Muscles

There are numerous muscles in the forearms and wrists, so we tend to split them up into three groups.

You have the brachioradialis, a large muscle that flexes the forearm. This muscle is the most noticeable of the forearm muscles and is primarily worked in exercises such as hammer curls.

Then there are flexors. These are muscles that are responsible for supination of the forearm.

An example of supination would be having your forearms out in front of you and turning them so that your palms are facing towards the sky.

Flexors are also responsible for extension. If you held your arm out in front of you and placed your hand in a “stop” motion with your palm facing away, you would be extending your wrist and fingers.

Finally, you have extensors; they perform the opposite movements to the flexors:

This is a very basic explanation of the muscles in the forearm and what they do, more than enough for you to understand what each exercise is doing, and why.

How to Build Bigger Forearms

Your forearms are mostly made up of slow-twitch muscle fibres, which means that they will respond best to higher volume training. Lots of reps and sets are your best bet!

This is good news for anyone training using their body weight. It is easier to train high reps rather than train using heavy loads (unless you are using a weighted vest).

However, that does not mean that forearms will not also respond to low rep/heavy load training.

A lot of personal trainers and strength coaches are leaning towards a mix of rep-ranges.

While most of your training should be using high reps, you can also mix in the occasional low-rep sets.

Traditional bodybuilding techniques like super-sets, drop sets, and training to fatigue will also help. But a lot of these suit resistance training rather than bodyweight training. Something to bear in mind.

There aren’t actually that many forearm exercises that you can perform that don’t involve free weights, barbells, or machines. So, we’re going to have to be a little bit creative in the exercises we choose.

The most apparent exercise to start with though is the towel pull-up. The towel pull-up is an incredibly difficult variation of a normal pull-up, so are only worth doing if you are already excellent at performing pull-ups.

The towel pull-up involves draping a towel over a pull-up bar (or using two towels, one in each hand) and gripping tightly to the towel. You then pull yourself up as you would in a normal pull-up.

This works your grip strength, which will help to build large forearms.

If the towel pull-up is too tricky, you might want to consider an easier variation.

The inverted row is an exercise similar to the pull-up but you have your feet on the ground and use a parallel bar to pull yourself up.

Adding the towels will make it more difficult for your forearms (which is what we want), but the exercise will still be easier to do than a pull-up.

Check out this video of an inverted row using towels:

Bodyweight dips are another exercise that works the forearms, albeit indirectly.

You don’t need to use a towel to target the forearms, performing dips will work them hard enough as it is.

However, you’ll be limited by how far your chest, triceps, and deltoids will allow you to go.

Climbing, as in rock climbing, or abseiling, is a great way to build up grip and forearm strength. It may be one of the absolute best forearm building workouts out there.

Another excellent exercise for forearms, this time one that is a traditional bodyweight exercise, is the bodyweight hammer curl.

This exercise is an isometric exercise, which means that instead of using movement, you are holding your muscles in a fixed position and creating your own tension.

There should be equal tension, and neither arm should move. This will place tension all along your brachioradialis. Hold for 30 seconds and then switch arms.

There are a lot more forearm exercises that use weights.

Farmers’ walks, where you hold a dumbbell or weighted plate in each hand and walk up and down a corridor are fantastic for forearm strength.

If you are committed to performing a bodyweight-only forearm workout, then hopefully the exercises mentioned in this article will suffice.

Train at high reps, 15-20 or more, but feel free to toss in the occasional low rep and medium rep sets – particularly if you can increase the load via a weighted vest or something similar.

But there is no real reason to ignore free weights. They are a lot more versatile and more suited to people with limited strength.

If you can’t perform pull-ups, dips, or rock climbing, then your options are very limited whereas there are about thirty free weight exercises that can help.