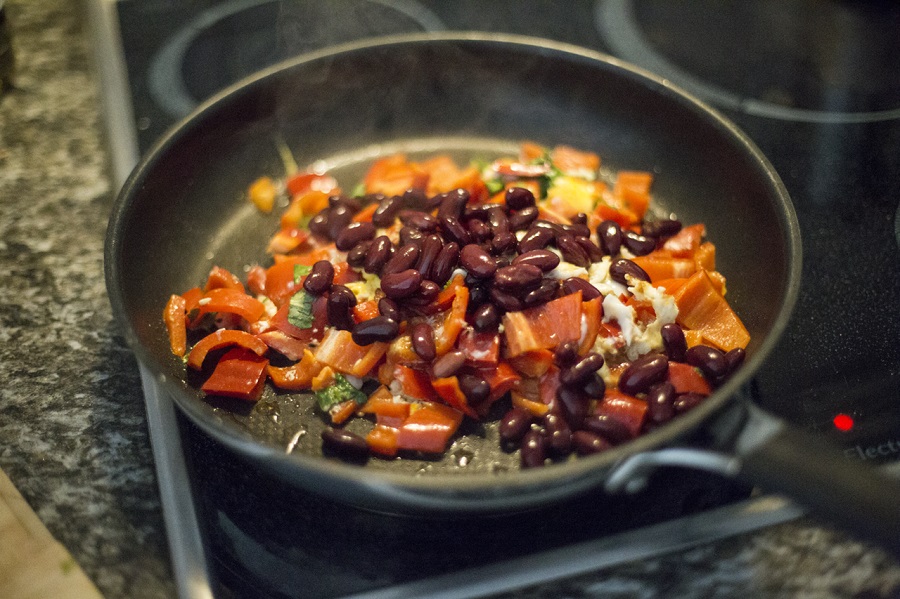 For a lot of (prejudiced) people, that’s a total no go. How can your body survive without meat and eggs, among other things? How can you call that proper nutrition?

As always, you will easily find a myriad of people letting you know that, in fact, it’s impossible. Yes, that also applies to the case of calisthenics.

Obviously, they’re wrong. As it happens with other prejudices too, the stereotype that a sustainable workout routine and the vegan lifestyle clash with each other falls flat.

And I’m going to show you working examples of combining both of these things. But let’s get started with some tips first.

Keep Track of Your Protein

It’s obvious. Your greatest enemy, the face of workout deficiency – that would be our good old friends, proteins.

Sticking to the vegan diet you’re getting rid of ethically questionable, but highly nutritious products. Bulking and nourishing your body will prove to be a bit more of a challenge.

Time to meet your new friends, then. Let me introduce them:

I’m a huge fan of both, though lentils are definitely my favourite. It depends on how you approach your calorie count, but whipping some hummus (chickpeas) or going for a bowl of lentil soup is a good way to diversify if things get bland.

That said, I’m a huge fan of black beans. Best taste, and according to the National Nutrient Database, an 86g cup of them has approximately 7.62g protein.

I’m no rocket scientist or high-class mathematician, but something that consists of 9% protein and keeps things simple while being fingerlickin’ good…I’d centre my diet around it.

I’m a big fan of these three. Unfortunately, almonds can get quite expensive sometimes.

There’s a catch with beans and nuts. Allergies put aside, the first can cause quite a bit of flatulence…and the latter? If you’re prone to stomach discomfort or suffer from IBS, you’d encounter some problems with a lot of nuts.

So what might be a little bit easier on your stomach? And I say might, because things differ from person to person.

Here are three good alternatives to get your protein:

Just remember that it can get high on calories and have a huge amount of fats. However, peanut butter fats are actually healthy and calisthenics being intense enough, you’re always on the lookout for some good fats anyway.

The best peanut butter I’ve found so far is Peanut Butter & Co, which was recommended to me by my significant other. She runs CozyStream, a site where among other things she review quality brands (including ethical ones).

Except for the one they have with added honey, all of Peanut Butter & Co. products are also vegan. so you can safely scoop a spoon and get your protein + fats. We love them.

Honestly, I prefer a non-supplement way of getting my proteins whenever it’s possible. However, if you find it more convenient, there’s no shame in getting supplements. Hemp protein is especially popular among vegans if it’s about working out.

Protein bars can be a real hit or miss, and not a lot of them are vegan. However, there are some good ones. I’ve recently been keen on these whole food bars. While they are average in terms of protein richness, they’re also a great snack for some quick morning energy to kickstart a calisthenics session:

That said, these can get quite sugary which is something not optimal. I’d list them as your last resort because of that, even though there are some bars that taste absolutely heavenly.

By the way, tofu is also a very good protein source. It tasted quite bland to me, but you can think of ways to make it more appealing.

I meant coffee and sleep.

As we know, coffee runs the world. Yet, some people shy away and view it as a kind of guilty pleasure.

Especially if you’re new to the vegan world, you’ll get cravings and temptations. ‘Giving in’ to pleasures like coffee is the best way to stay afloat and motivated.

(Also, that crazy energy rush that might send you into a beast mode morning workout!)

Sleep is yet another tremendously important thing. Wow, thanks for opening my eyes, man – you’d say that I know.

However, there’s an additional layer to getting proper sleep when you’re both doing calisthenics and being a vegan.

Get Ready to be Twice the Persistent

Keeping to a workout schedule is hard enough as it is. It’s a trial of body and spirit.

However, I feel that as a vegan you should be going above and beyond that usual persistence.

Because unfortunately, there is still a lot of fitness experts, sites and just general opinion that being a vegan and sticking to fitness is…somehow subpar.

The calisthenics community seems more open-minded and welcoming than other types of workouts. Yet I’d advise you to load up on discipline and patience – towards yourself, and the people surrounding you.

(Yes, that applies to online interactions too.)

The pinnacle of calisthenics is actually vegan. He rose to his outstanding form sticking to a fully vegan diet. You can see his amazing body transformation here.

If you haven’t seen him yet, here’s a showcase video to get you motivated which shows him perform some amazing calisthenics exercises:

By the way, remember the prejudice I was talking about?

At the time of me writing this post, one of the latest top comments is ‘And this guy is a vegan…damn.’

You might think – ‘But man, no way I’m getting in a form as crazy as this dude. He’s a celebrity!’

Here’s a regular Dutch guy that very well could be you. His CalisthEthics nickname is also genius.

Reading his comments and reflections, it took him 3 years to reach that point. However, he also elaborates on the fact that it was a casual hobby for him, so he slacked around for quite a lot of time.

According to him, even when sticking to the supposedly ‘inferior’ (I’m trying not to laugh here) vegan diet, you’ll start seeing significant improvements after 1-3 months of regular workout sessions.

Judging by him being so casual with his calisthenics, if you’re serious about it, you might reach his form in less than a year or so.

The bottom line is clear: veganism and calisthenics not only can but absolutely do go hand in hand. Ditch the pessimistic thoughts and negative comments you might have seen around.

Take care of your protein, add some fats, and revel in the world of a plant-based diet if you chose it as your lifestyle. It won’t impede your calisthenics journey in any negative way, as long as you’re smart and flexible about constructing your diet.