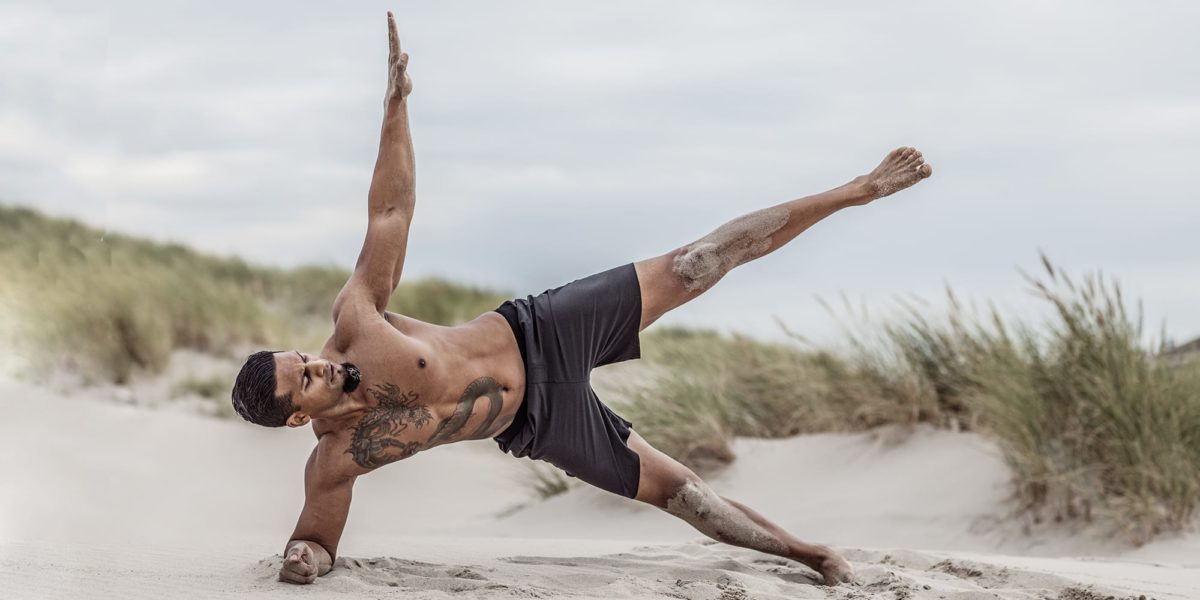 Calisthenics has a little something to offer for everybody. Most of the training involved when doing calisthenics will apply to a wide variety of sports and hobbies, and yoga is no exception.

There is a multitude of benefits that carry over from calisthenics to yoga, which we will discuss later in this article.

We will also share with you a custom-made calisthenics workout plan that is specifically crafted for people who want to improve or aid their yoga skills.

So, whether you are an avid yoga practitioner trying to improve your technique or even a complete beginner at yoga, this article is for you.

4 Benefits That Calisthenics Can Bring to Yoga

Calisthenics is a training style like no other. Many other training routines such as weightlifting or powerlifting would not be very well suited for yoga. However, calisthenics is different.

There are endless ways to train calisthenics, many of which will directly improve your skills in yoga.

We will share with you just a few of the benefits that calisthenics has to offer to yoga practitioners.

Many of the exercises used in calisthenics are great for balance and stabilisation. This is because most exercises will strengthen the stabilisation muscles in your core.

In addition, calisthenics will also strengthen tendons and muscles, which is another important factor when it comes to body stabilisation.

Both of these combined will allow yoga practitioners to get into positions that they may not have been able to before, as well as allowing you to feel more stable and centred in those positions.

Improved endurance is another key advantage that yoga practitioners will get from calisthenics training.

Calisthenics holds will train your body to stay in uncomfortable positions for longer, as well as reducing the mental strain that comes with it.

Also, doing high-intensity calisthenics workouts will improve your stamina and tolerance for stress, which will make those long yoga sessions much easier.

Another major benefit that calisthenics training can provide is increased strength.

Many of the calisthenics exercises and workouts provide enough resistance to cause hypotrophy, which makes your muscle grow. This, in turn, is beneficial for a plethora of reasons when it comes to yoga.

Strength helps with both of the previously mentioned points, as well as enabling you to get into difficult and strenuous positions that require a certain degree of strength.

Last but not least, increased flexibility.

A wide range of calisthenics exercises require a good amount of flexibility. For example, doing squats will improve the flexibility of your legs and hips.

After a while of doing different calisthenics workouts, you will be much more flexible as a result, compared to doing just yoga alone. This is because resistance is also added when doing calisthenics, either with your body weight or through resistance bands.

When resistance is placed on a limb in an exercise that already requires some form of flexibility, it amplifies the effect ten-fold. As a result, you will become much more flexible.

Our Calisthenics Workout for Yoga Practitioners

Due to the wide range of exercises and workouts that the term “calisthenics” covers, it is important to create the right workout depending on your goals.

For yoga practitioners, the main focus will be calisthenics holds, upper body strength work, and squats. In addition, a workout that is high intensity is also crucial.

We will now provide you with a workout that is specifically made for yoga practitioners, by taking into account all of the factors mentioned above.

The Push, Squat, and Hold Circuit

This workout will involve 3 exercises which are; push-ups, squats, and calisthenics holds.

The push-ups will develop your upper body as well as strengthening your tendons and joints – something which is vital when performing yoga.

The squats will improve your overall flexibility and also build your core slightly.

These 3 exercises will all be performed to failure and performed back-to-back, with 30 seconds of rest after every set, and 8 sets altogether.

The calisthenics hold that you choose to do is dependent on your strength level. To find a variety of different holds, check out our list of calisthenics exercises here.

Choose a hold that you think you will be able to perform and hold for at least 10 seconds (don’t worry if you can’t do any of them for 10 seconds, you will improve quickly!)

Now that we have covered the workout, let’s look at a few of the most common questions people have when beginning a new workout routine.

How Often Should I Perform This Workout?

This calisthenics circuit can be performed 2-3 times per week. You must have at least 48 hours of rest after doing the circuit.

What Happens If I Can Barely Do Any Push-ups or Squats?

If you struggle to do even a few push-ups or squats on each set, don’t worry. You will quickly progress after following this workout for a few weeks.

How Can I Get Better at This Workout Quicker?

The most important factors that affect your recovery is having good sleep, getting at least 48 hours of rest time in between workouts, and a diet rich in protein.

Our calisthenics workout will certainly be a challenge, but the benefits it will bring to yoga practitioners will far outweigh the effort.

Leave a comment and let us know the results you have seen from our calisthenics circuit, and how that has transferred over to yoga too.