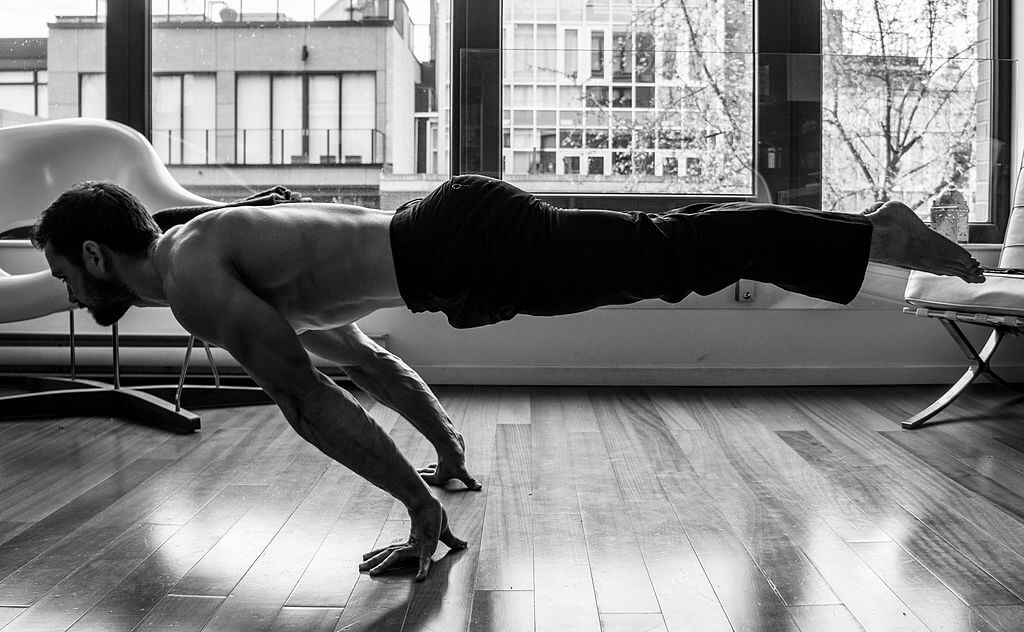 If you really want to build muscle, burn fat and generally improve your fitness it is very important that bodyweight exercises are part of your training program.

We do not all need or should lift bars or dumbbells, but bodyweight exercises are essential. These exercises help to quickly transform bodies and what I like most about them is that they can be done anywhere and at any time.

But are these exercises effective?

The answer is yes and you can see this when you see the bodies of gymnasts who go to the Olympic Games, such as Herschel Walker or others who train in the open air.

Even Arnold Schwarzenegger himself is evidence of the effectiveness of these exercises and it is known that his workouts always included a good amount of pull-ups.

The positive aspect of these exercises is that they are very natural and can be done painlessly. By doing them you will not be bound to a fixed range of motion, as in a machine, and your hands will not be joined together. That makes these calisthenics movements more careful with your joints.

Pushing the Limits of Calisthenics Training

There exists, individuals, who have the ability to defy gravity and achieve what most of us might see as ‘impossible’; people who make extremely difficult exercises look very easy.

These individuals who practice using their own weight and do what is known as calisthenics.

Calisthenics training serves to enhance strength, using the body’s own weight to develop natural strength, after a series of progressions that become increasingly difficult at each stage.

The benefits of calisthenics are multiple since it strengthens multiple muscle groups at once, as well as tendons and the nervous system simultaneously.

But just how impressive can calisthenics exercise be? What are the limits of human strength when applied to bodyweight only exercises?

Understanding what the most difficult exercises are in any fitness discipline is important; these exercises aren’t just amazing to watch, they are key to taking you out of your comfort zone and providing you with an end goal.

Read on as we present a list of top challenging exercises using only body weight.

Note: This list below is in no particular order.

This is yet another extremely difficult exercise that requires an incredible amount of physical strength, especially from the upper body.

To execute this exercise, focus and impeccable body balance are key.

The one arm handstand push up (without wall) is an exercise considered impossible by many and only a few individuals in the world are determined and are training for it day in day out.

However, the wall assisted version of this exercises has been conquered, but make no mistake, it is still incredibly difficult to perform; an ultra-heavy minimalistic no-tech upper-body pushing exercise. An ideal way to develop shoulder and triceps strength.

Your full concentration, dedication, effort and hard work is required to execute this move.

The one arm planche is undoubtedly one of the most difficult hand-balancing movements out there.

You need a remarkable amount of strength and skill like that of a pro break dancer to be able to perform this exercise.

It is very similar to the normal planche, but far more difficult, as this one requires the use of just one arm.

Before you attempt this, it is recommended that you have a really solid one arm handstand and planche. If you can’t perform those, don’t even bother with the one-handed planche.

This is definitely bodyweight exercise at its finest, something which a lot of people don’t think is possible.

Imagine a handstand, not just any handstand…one performed with just two fingers. But it doesn’t just end there, a handstand with two fingers + push-ups. Incredible!

Frank Medrano is one calisthenics master who can inspire people to take up incredible fitness routines like never before.

He’s a beast in the calisthenics community and well known for representing the muscle building possibilities when mixing calisthenics with a Vegan diet.

His tricep and shoulder strength are amazing, and in the video below you can see him demonstrate tiger bend push-ups alongside a number of similar variations which push the triceps to their limit.

If by any chance you can maintain the L-hold, then it is time to move to the next step. The Nakayama Planche exercise contracts the shoulders and abdominals to lift the body and raise the legs in the air.

In Olympic gymnastics, they often train to do more advanced exercises on the pommel horse and rings, incorporating a movement that brings the legs down, elevates the lower part and brings the legs through to the inverted support.

This movement demonstrates absolute control of balance and strength.

Similar to Nakayama Planche, Manna is even more difficult. This exercise requires a huge amount of flexibility in the shoulder as well as an extreme force in the abdomen to achieve the progression.

Performing this exercise is no mean feat and requires years of proper training. You need a great amount of strength on the shoulder capsule. It is similar to the iron cross but much harder to execute.

If you’re searching for crazy, extremely difficult exercises, then this exercise has to make your list.

It is mind-blowing, one which requires incredible body balance, tremendous strength, and coordination to be able to pull it off…. especially if you can perform 17 of them!

Here, you begin in a normal Planche position, and pop yourself high into the air with every bit of energy and fast twitch muscle fibre that you can gather, in other for you to clap your hands. This is certainly not for the faint-hearted.

This exercise is one which involves several stabiliser muscles, interacting with each other simultaneously, as you transition in a planche position from one place to another.

Start off in a normal planche position and transition for as long as you can.

There is no doubt that you can damage your finger trying to perform this exercise, and that shouldn’t be a surprise, as it is extremely difficult to execute.

It requires a massive amount of strength to be able to lift your entire body off the ground with one finger, so don’t just rush into it, as such an exercise requires proper training.

The prayer planche is a very difficult exercise to perform, as it requires great strength, balance, flexibility and endurance to scale through.

A very difficult exercise to perform, but the one which may be most commonly attempted on the list.

The one arm muscle up requires incredible strength to lift the entire body from the ground with one arm, above the bar.

The human flag demonstrates an incredible amount of force using the muscles of the whole body – in particular, the wrists, shoulders, abs and glutes.

It is an extreme movement and requires total control of the body, as well as abdominal and shoulder strength.

To make this more difficult, many people add an ‘air walking’ motion to the skill as they move their body through a slow and controlled movement similar to a clock hand.

There are numerous progressions to this skill which make it more attainable for intermediate calisthenics practitioners. The legs can be contracted to reduce the overall lever force or you could also begin by ‘kicking up’ into the position.

This ranks as arguably the most difficult bodyweight exercise ever, nearly impossible to pull off, and can be performed by only a few people in the world.

The major risk of performing this exercise is breaking the index fingers and takes years of practice to perfect.

Xi XingSong, a 19-year-old Shaolin monk, was said to be in a state of deep Zen meditation as he performed this feat in front of a cheering crowd in 2009.

One final one to share with you is the one-finger handstand. You would need a tremendous amount of strength and confidence on the finger to be able to perform this exercise, which leaves one final question:

…Is the video below real or a fake?!