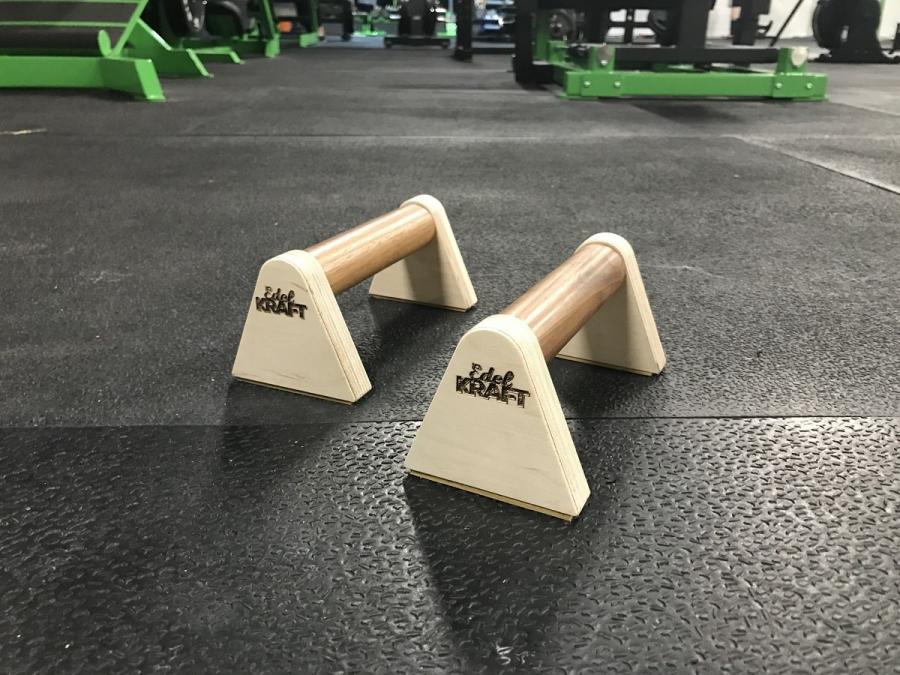 Performing push ups daily is something that many people find beneficial to their overall exercise routine. However, what people don’t always know or haven’t heard about is how using push up bars can turn a basic workout into something even better.

Benefits of using push up bars

Here are just some of the various benefits of adding push up bars to your arsenal:

#1 Safer for the Wrists

Unlike with push ups performed with your hands outstretched on a flat surface which can add extra strain on the wrists, using a pair of push up bars elevates you into a higher position. This allows you to avoid your wrists and arms being at an awkward angle to your hand direction when starting each push upwards into the air.

Anyone dealing with a repetitive strain injury or a weakened wrist as a result of a previous break there will find the different angle preferable. Indeed, it may make push ups possible for them once again if they’ve previously removed it from their exercise routine.

The wrists can be strengthened through push ups performed healthily. Without the usual wrist pain, the wrists can become stronger over time through exercise.

The thumbs can also be adjusted to face forward rather than wrap around the bar itself. This might be a more comfortable position for some people too.

Also, being higher off the ground, L-site training is a possibility too.

A fuller or elongated range of motion with a push up bar allows the muscles to stretch out more.

The muscle lengthening has been found by the Journal of Strength and Conditioning Research in 2012 to be helpful to increase overall strength. Also, the researchers discovered that muscle growth was moderately increased compared to when not using push up bars, suggesting that they’re worth it for other reasons too.

When having difficulties in performing full push ups, it’s possible to start them with your knees pulled up near to your chest rather than with legs outstretched. The alternative posture as an adjusted push up using the push up bars and knees tucked in delivers good results compared to a regular push up.

Since the bars themselves aren’t substantial or too cumbersome, it’s easy to bring them out when needed and return them to storage when not in use. This facility is highly convenient for use inside smaller garages or spare bedrooms converted to a private gym where space is often a factor.

Areas Where Caution is Warranted

One of the few drawbacks to the use of push up bars is that it puts additional strain on the shoulders when running through the full range of motion. This is a little different to when performing push ups from the ground without the aid of this piece of equipment.

Now, for most people, this isn’t a cause for concern because they have robust shoulders. The reason we mention it is for those exercisers who have previously suffered from shoulder damage or a tear that has either healed up naturally or was repaired through an operation. In which case, the equipment may add additional strain to this area.

Which push up bars are recommended?

The EdelKraft push up handles are excellent. The pair are made from either solid Beech or Walnut wood – the latter has distinctly darker handles which are how you can tell them apart. The wood is FSC-certified too.

The pair only weighs 500 grams, but between both handles, they support a weight of up to 200 kg.

Natural oil is used on the handles which lend them a smoother feel. It also adds an element of waterproofing when occasionally using the EdelKraft product outdoors.

We have a full review of the EdelKraft push up handles here. They’re sold online. These are them on Amazon.

Exercising using push up bars is different from getting some regular push ups knocked out before moving onto other parts of your exercise routine.

By using a set of push up bars, you’re changing the angle of your arms and wrists in comparison to your hands when getting the push ups completed. Not only does it lift you higher allowing a fuller range of motion, but it takes some pressure off the wrists which is something that’s off-putting for some people.

With regular push ups, you’re going old school. That means that you’re running without useful equipment that can extend your physical capabilities during exercises. It also leaves you slightly more vulnerable to potential future injuries (or reactivating an old one) too.

What’s the difference between push up bars, parallettes, and dip bars?

A push up bar is low to the ground and designed to perform handstands, push ups, and not much more than that. It has handles to grip and will partly support your weight. As we British like to say, “It does what it says on the tin”.

Parallettes are a different product altogether. With that said, they are taller versions of a push up bar which allows for greater flexibility of movement. Indeed, the height of a set of parallettes varies between models and brands – about 30cm would be a good average height for them.

Some parallettes as low to the ground as a push up bar, but the noticeable difference is that the bar length is considerably longer. Whereas with a push up bar, they have handles, parallettes have longer bars which increases the flexibility in how they’re used. Take a look at our best parallettes guide to learn more.

Dip bars are consistently the tallest of the bunch. If you think about parallel bars in a gymnasium at school, that’s close to what dip bars offer. You can walk between them, grip the bar on either side of you, and push up into the air. Performing dips is the main purpose of acquiring some dip bars, but they also allow you to perform a range of different exercises beyond that too. Our best dip bar for Calisthenics guide is useful to see what’s available and how they can expand your routines.

What exercises can I perform using push up bars?

There are different exercises which may be performed with the aid of a pair of push up bars. These include:

While push up bars are the smaller cousins of parallettes, they offer considerable flexibility in how they can be used. There are notable health benefits along with the avoidance of possible injuries when switching from regular push ups to ones performed using a push up bar. They’re also smaller, making them easier to store away when not in use too.