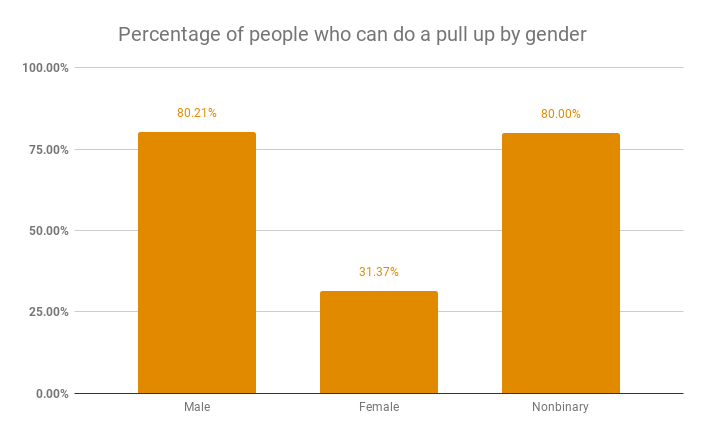 Can you do a single (unassisted) pull-up?

Some people may see the pull-up as a simple exercise which they can perform many reps of, whereas to others the pull-up may seem impossible.

We wanted to find out what percentage of people can actually perform a pull-up, so in a recent survey, we asked just that.

We also asked users for their gender, age and weight to see if these factors had an impact on the results.

What percentage of people can perform a single pull-up?

Of the 142 people asked, 68.3% of people answered that they were able to perform a pull-up.

See the chart below to see how that changes per gender.

How does that compare to what you imagined?  Whilst researching for another article I found that the Marines dropped the entry requirement of 3 pull-ups for women after 55% couldn’t meet the challenge. Considering the survey was aimed at your every day person as opposed to a bunch of aspiring Marines, I thought 31.4% was an impressive figure for the women who answered.

Notes on the above data:

Are those who are heavier, less likely to be able to perform a pull-up?

There didn’t appear to be any trend in the above graph, with the exception of those who may be heavily overweight (over 260lb).

Perhaps if the user was asked for their body fat percentage, or if the existing data was adjusted to calculate the users BMI, then this could maybe provide some further insight?

Are you more likely to be able to perform a pull-up if you are shorter or taller?

It appeared that users who are taller are more likely to be able to perform a pull-up, though since Males are taller than Females, on average, this data could likely correlate to the participants’ gender. Unfortunately, there wasn’t enough data to break the information down further by both height and gender.

Notes on the above data:

For those who can do a pull-up, how many consecutive pull-ups are they able to perform?

This was the most intriguing finding from the survey, as not a single person chose the 13-14 answer!

But why is that?

My own theory is that people most commonly train in sets of 8, 10 or 12 reps, therefore those who could perform more than the 12 consecutive reps when challenged would likely still choose 10-12 reps as their answer, as this is the max rep range they are used to working too.

As a further insight, of the 68.3% of the participants who could do a pull-up, 32% of those can achieve 10 or more consecutive pull-ups.

11.2% of participants said they can perform more than 15 consecutive pull-ups… Impressive!

Final points about the survey

Those who responded to the survey were from the Sample Size Reddit community.

If you would like to participate in the survey (or simply view the questions asked) you can find it here. The case study will get updated if the data set significantly improves.

2 thoughts on “Case Study: What Percentage Of People Can Do A Pull-Up?”