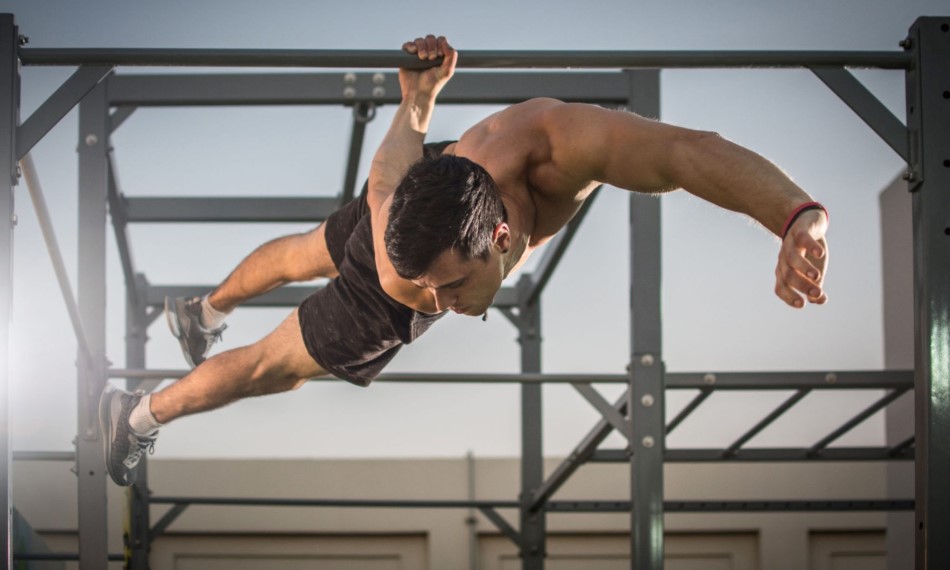 You will hear of many new terms when starting calisthenics (even more so if any type of resistance workout is new to you), but don’t worry, we have you covered with our calisthenics glossary.

It may be a little overwhelming at first. If you are only beginning your journey into calisthenics, you should not worry about knowing all the “correct” terminology. The calisthenics community are very welcoming and accepting of beginners and pros alike. However, if you should ever hear or read some terminology you don’t understand, refer back to this article. Feel free to come back to it whenever you want to improve your knowledge or need to check something.

Calisthenics is a term used for exercises that can be performed without using weights. Examples of this are push-ups, pull-ups and dips. The majority of calisthenics exercises only use bodyweight but some equipment can be used such as resistance bands or gymnastic rings.

Bodyweight exercise are exercises where your body is used as the resistance/weight and no other weight is used.

These are the basic counters of exercise. Any program or routine that you will ever do will be in sets and reps. Performing 30 push-ups would be completing 30 reps, and if you broke that down into 10, 10, 10, then you would be performing 3 sets of 10 push-ups. For example, if you see a routine you wish to follow and it says perform 5 sets of 12, this will mean you do 12 of the given exercise, followed by a break, and then you do another 12 which will be your second set and so on.

This refers to the desired range you should aim to achieve within the set, rather than an exact number, e.g., 5-8 reps. You should look to make the exercise easier if you are unable to complete the minimum amount of reps, or make it harder if you can complete many more reps than the state range. The most common rep ranges are between 1-12 reps.

This is the amount of time you are recommended to rest for between each set. Rest time is needed for every workout routine to allow you to maximise muscle growth and strength and also to prevent injury and exhaustion.

Stands for ‘as many reps as possible’. When this term is used there would not be a standard rep range within each set; instead, you would perform reps until failure to complete the set.

Similar to AMRAP but is used for static exercises, meaning you are required to hold the position for as long as you can until failure.

A specific workout that lasts 4 minutes and consists of 8 rounds. Each round requires 20 seconds of work at maximum effort, followed by 10 seconds of rest.

A more commonly used term for Parallel Bars. Parallel bars are two bars across from each other that can be used for a lot of calisthenic exercises and movements.

Performing several exercises in sequence to develop a routine or ‘flow’.

This refers to completing the exercise in its fullest form to ensure all required muscles are being worked in the exercise. Anything else would be considered a partial repetition. A well-known example of a partial repetition is people who perform push-ups, but don’t get their chest all the way down to the floor at the bottom of each rep.

A simpler version of an exercise that is used to help you to progress to the full exercise. Performing push-ups with your knees on the floor is a great example of a progression for anybody who is unable to perform regular push-ups.

RTO is an abbreviation for rings turned out. This is when the pit of the elbow is pointing straight forward and the rings are at around a 45-degree angle to the body.

This is the point where you attach a band to an object. Changing your distance away from the anchor point can make an exercise easier/harder.

A passive exercise where you are hanging from the bar at the bottom position. This exercise is excellent for building up grip and forearm strength. Proper pull-up technique requires you to complete each pull-up in a dead hang position, with your back and shoulders disengaged.

Focusing on power by performing the hardest part of the exercise as fast as possible. For example, an explosive pull-up would be putting everything you have into the rep to pull yourself up as quickly as possible.

Where you pause at the fully contracted position of an exercise and hold, before completing a rep. For example, a pause squat would be squatting down, holding the bottom position of the squat for a certain amount of time, and then proceeding to complete the rep.

One Arm Pull Up (OAPU)

OAPU is an abbreviation for one arm pull up.

This term is more commonly used when weightlifting but can sometimes be used in calisthenics too when making use of extra weights or a weighted vest. This is where you do an exercise with as much resistance/weight as you can possibly do, for one rep.

This is where you physically can’t complete any more reps of a set. When you get to this point you will not be able to complete another rep until you rest/have a break.

Where you focus on the lowering portion of a movement. For example, for a pull up after you have got your chin over the bar you slowly lower yourself to the starting position.

This is an exercise that incorporates many muscles and muscle groups to complete. Examples of this are push-ups, pull-ups and squats.

This is a movement that specifically targets one muscle group.

A workout or exercise routine that incorporates muscles from all over the body, such as legs, shoulders, chest, arms.

This is an exercise routine in which you work out different body parts on different days. For example, chest on Monday, legs on Tuesday, back on Wednesday etc.

A type of exercise where you start with high resistance for your first set, then lower it on your next set.

Working out two different muscle groups back-to-back. For example, doing a set of push-ups followed by a set of squats.

This is when you repeat the same routine every week, in hopes of getting stronger and gaining muscle.

A day which you don’t work out on. You need multiple rest days per week to progress and recover when following an exercise routine.

Thank you for reading. We hope this glossary on terminology of calisthenics was of use to you. Don’t stress if you don’t understand or have never heard of one or more things on this list. The most important thing in calisthenics is to have fun and get stronger, so if you are new to calisthenics or working out, just get stuck in and have fun!